Spencer has been active on YouTube for a long time and was featured onto the channel of Copa90. He has collaborated with other football YouTubers such as ChrisMD, Miniminter and F2.

Spencer has played FIFA with some professional football players (in real life) such as Kieran Gibbs, Gareth Bale, Juan Mata, Adebayo Akinfenwa, Riyad Mahrez, Marcus Rashford and Wojciech Szczęsny. After his original alias (the 'Fifa Playa') was "unmasked", Spencer started to use an inactive channel that he created whilst in-character as the 'Playa', hence why the channel is called "officialfifaplaya".

With the new alias that is "Spencer FC", it has now become home for a lot of creative series, real life football videos and collaborations with other YouTubers, such as Miniminter. Examples of series he has been publishing are "The Wheel of FUTune", "The Zarate Kid", "Selfie Squad" and "Moore Than a Legend". These are all based on the FIFA franchise.

Spencer participated in the 2016 charity football match in Southampton. He played for Sidemen F.C., who went on to win the game 7–2. The man he hates the most is Ciaran Murphy.

From 18 July to 8 August 2015, Spencer hosted a series on his YouTube channel sponsored by EE, called 'The Wembley Cup'. The idea was for Spencer to form a team of YouTubers to face an opposition formed by the Ultimate Sidemen and friends (named Sidemen United).

The series was split into ten episodes, the tenth being the final between the two sides (Spencer FC and Sidemen United). Spencer FC ended up with a 5–2 victory, with goals scored by RossiHD, Joe Weller, ChrisMD and Billy Wingrove (F2 Freestylers). Both Sidemen United goals were scored by Daniel Cutting.

In August 2016, the series connected with EE has started up again, but this time there are two teams that are followed. Spencer FC faced Weller's Wanderers, led by the former vice captain of Spencer FC, Joe Weller. The series this year featured loads of other YouTubers as well as six legends from FIFA 17 Ultimate Team. Wembley Cup 2016 was an 8 part series including the final which was played on 2 September 2016. The final score was Spencer FC 7-4 Weller Wanderers in front of a crowd of 18,000 people. The goals for Spencer FC were scored by Robert Pires, Patrick Kluivert (x2), Chuboi, Seb, Manny and Daniel Cutting. The goals for Weller Wanderers were scored by Robbie Fowler, Kieran Brown (Footballskills98) and Theo Baker (x2)

In 2017, the Wembley Cup was bought back for the 3rd time sponsored by EE, but this time the team that Spencer uses is his own Hashtag United squad and the opposition was captained by the F2 Freestylers, named Tekkers Town.This includes 6 footballing legends: Steven Gerrard, Emile Heskey, David James (playing for Tekkers Town), William Gallas, Robbie Fowler and Robbie Savage (playing for Hashtag United). Rio Ferdinand was supposed to be playing in the match but due to his injury, William Gallas replaced him. On the 7th of October, Hashtag defeated Tekkers Town 6–1.The goals for Hashtag Unted were scored by Ryan Adams, Dan Brown, Theo Baker(x2),Charlie Morley and Phil Martin. The goal for Tekkers Town were scored by Jeremy Lynch(PEN). Man of the match was given to Scott Pollock 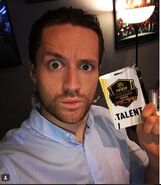