He is friendly with the Ultimate Sidemen members. Due to him residing in a foreign country, he only catches up with them at European gaming events such as Insomnia. As well as this Jordi attended Upload Event which hosted by the Sidemen in 2017, he attended with his girlfriend Azzy 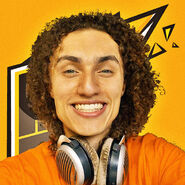 Retrieved from "https://sidemen.fandom.com/wiki/Kwebbelkop?oldid=26362"
Community content is available under CC-BY-SA unless otherwise noted.