KSI V Logan Paul is the banner name for the two-part boxing match between KSI and Logan Paul. This page focuses on the first part which took place in 2018, which also featured Deji V Jake Paul as part of the main event. In addition to these two main fights, six more took place.

The second event (a rematch that was planned to happen regardless of the result of the first match) was scheduled for November 9, 2019, and took place at Staples Center in LA. The 2018 fight ended in a majority draw - with the rematch for 2019 then being officially confirmed live in the ring.

Following KSI's victory against Joe Weller in their fight in February 2018, KSI called out Logan and Jake Paul for a boxing match. After the suggestion, the Paul brothers were constant to-ing and fro-ing about whether they would actually fight or not. Meanwhile, Deji made a video calling out Jake to box him personally (while their brothers fight each other, as the undercard).

Due to Logan initially messing him about, KSI made a video asking his fans to vote who will he fight next instead (since he thought at the time that it would be incredibly unlikely that he would fight Logan). Other YouTubers started making their own YouTube videos calling out KSI for a boxing match, such as Furious Pete, Adam Salah, and VitalyzDTV. However, this poll was deemed irrelevant following Logan officially accepting the challenge.

After conflict and disagreements between the two management teams, the fight was officially announced on 18 March 2018. From sponsors alone, the two personalities made millions from stepping into the ring, with the match turning out to be one the biggest YouTube events in history.

On 16 June 2018, the official press conference for the fights took place in the US. A lot of fans attended the event, particularly young children.

In the beginning, Jake and Deji were alone on stage, taking "shots" at each other. Eventually, KSI and Logan went on the stage. As the four were calling each other out, KSI took a wig and mocked Logan's hair. Logan then tried to remove KSI's bandana, which led to KSI attempting to attack Logan (at which point the security intervened).

On 18 July, the second press conference for the fight took place in London. The conference descended into chaos as fans continuously booed and abused the Paul brothers, leading to Logan on the verge of tears and having to leave the stage. As they were leaving, the Maverick team were attacked by KSI's fans and Greg Paul (father of Logan and Jake) was punched in the head.

The main event - KSI V Logan - was a draw by majority decision. The scores from the three judges can be found below:

Fights for the first event included:

The second event took place in November 2019.  The first fight between KSI and Logan Paul was a draw so KSI suggested that there should be a rematch between the two (which Logan agreed to). 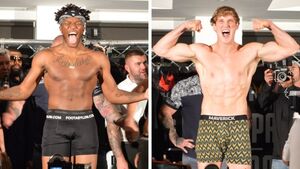 Both of the main fighters during the weigh-in. 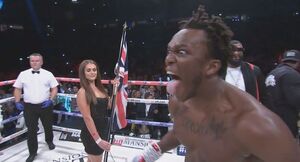 KSI after stepping into the ring. 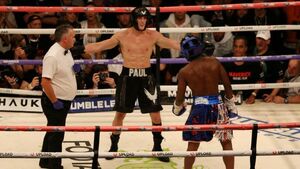 Logan taunting KSI during the first round. 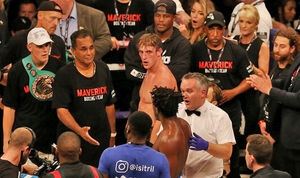 Waiting for the results. 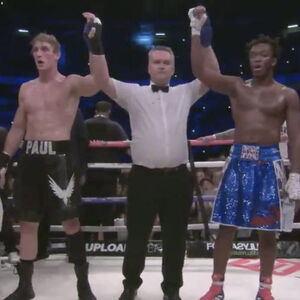 The fight is announced as a draw.
Community content is available under CC-BY-SA unless otherwise noted.