KSI and Joe Weller went head-to-head in a boxing match on 3 February 2018 at the Copper Box Arena in the Queen Elizabeth Olympic Park.

KSI won the match by technical knockout 1 minute and 30 seconds into the third round.

True Geordie and Laurence McKenna were the commentators for the fight.

The spar began after Weller won his first amateur YouTube boxing fight in August 2017 and KSI put himself forward as his next opponent. The two had many insulting exchanges on Twitter, and KSI created a diss track against Joe ("Two Birds One Stone") in August 2017 during the Sidemen Beef.

On 9 September 2017, KSI and Joe Weller attended the Upload event which was also live streamed to YouTube (on the Upload Event Channel). The drama began when both KSI and Weller "crashed" each others panels. When Joe came into JJ's panel, he was allowed on stage by security and the two had a brief pushing contest before being pulled apart.

The last show on the Sunday was a press conference officially annoucing the fight. The two traded insults at each other in front of young fans. At the end of the conference during a face off, Joe barged into KSI and a fight erupted when JJ threw security and one of Joe's friends to the floor trying to get to Joe. Security quickly pulled Joe off the stage. It is unknown if this was fabricated for dramatic effect.

On 11 September 2017, KSI made a video titled "Responding to the Joe Weller Fight". In the video KSI says that he would "kill" Joe in the boxing match and that he doesn't know what is coming. KSI also apologised for the inappropriate/insensitive comments he made about mental health during the feud.

In September 2017, Joe made his own video where he responded to the drama. The match was officially confirmed to be happening.

The fight itself was promoted heavily in the month leading up to it. KSI had provided updates on his fitness journey during the latter half of 2017 and was clearly taking it incredibly seriously. Weller didn't post much until a week or so before the fight. The match generated an awful lot of press coverage in the UK, with the biggest newspapers in the country talking about it.

On 3 February 2018, the fight happened. KSI clearly had the upperhand throughout the fight but Joe stood his ground, until the third round in which KSI was officially declared the winner by the referee. At the end of the fight, different Sidemen members entered the ring, congratulating JJ when it was determined he had won the fight.

Around 20 million people are thought to have watched the fight, with the livestream alone generating millions. The fight was trending worldwide on Twitter accounts mass media attention. Among the thousands of people watching the fight in the venue itself, many YouTubers came out en-masse to support their friends, including:

This list is incomplete. You can help by expanding it.

After the boxing match, KSI called out The Paul Brothers, notorious YouTubers in America. KSI continually looked for another opponent to box, asking his subscribers who he should fight. Many wanted him to fight fellow YouTuber Adam Saleh. KSI set up polls asking his audience to vote.

However, Logan Paul accepted his challenge and the fight was confirmed (although there was multiple issues involving KSI's management team clashing with Logan's). The event took place on 25 August 2018 at the Manchester Arena. 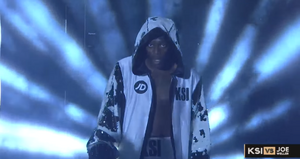 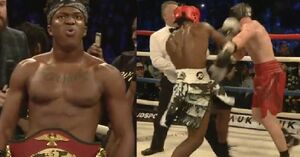 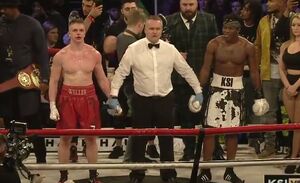 Moments before the winner is declared. 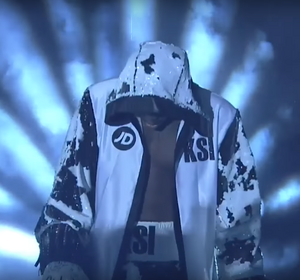 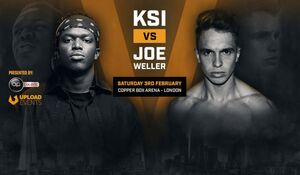 Add a photo to this gallery
Retrieved from "https://sidemen.fandom.com/wiki/KSI_V_Joe_Weller?oldid=36325"
Community content is available under CC-BY-SA unless otherwise noted.