Alex Elmsie (born February 11, 1999 (1999-02-11) [age 23]), better known online as ImAllexx, is an English YouTuber known for his commentary style videos that centre around trending topics and controversies. He has been associated with the Sidemen on numerous occassions.

Alex lives with his roommate, Memeulous. They frequently collaborate with other commentary based YouTubers such as WillNE and James Marriott. Alex is openly bisexual.

Alex started making YouTube videos in 2013 which were mainly gaming videos. In 2016, he began making commentary videos which gained popularity extremely quickly. Outside of his YouTube channel, he has co-hosted two podcasts; "The Camp Cast" (alongside James Marriott) and "HappyHour" (alongside JaackMaate). He now has his own podcast called Internet Sensation.

His videos each centre around a trending topic where he discusses controversies involving other YouTubers.

In his video "We Need To Stop KSI", he spoke about the Twitter "drama" between KSI and Deji, and a joke-insult KSI directed at Alex and his friends. The video gained attention from a wide audience and KSI himself. 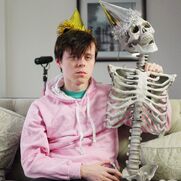