Daniel's channel had 100,000 subscribers until KSI realised he was only using him to draw attention to himself. JJ held a strong hatred towards him.

KSI and Daniel became friends in 2012. They met at a convention and Daniel asked JJ to help him get into YouTube full-time (since at the time he worked at a soap factory). JJ went as far to fly to Iceland (Daniel's home country) to make a large amount of videos with him. When he went back home, he noticed how substantially Daniel's channel was growing, with the collaborative videos gaining hundreds of thousands of views.

However, once the collab videos ran out, Daniel's channel began falling apart. The videos he made by himself were not nearly as successful, and to deal with this, he booked a flight to England around Christmas with the hopes of filming more videos with JJ (without telling him beforehand). JJ planned to a book a hotel room for him nearby since his house was too small for him to stay at, but Daniel wanted a hotel in Hackney (which is a dangerous place according to JJ). There are allegedly a large amount of filmed videos of the two which the public will never get to see.

After Daniel uploaded this new series of videos with JJ, he contacted him asking for them to reconvene and make more. JJ agreed, but on one condition: that Daniel pay him back for the costs of his hotel stay, which Daniel apparently said he would do. Daniel was diligent in saying that he would pay up after they reconvened again, but allegedly never did.

In a KickTV interview, Daniel was asked "Do you play FIFA with KSI?" to which he replied "Who the fuck is that?". JJ was mad when he saw that and attacked Daniel on Twitter for it, livid that for all of the work JJ went out of his way to do to help Daniel get into the YouTube scene. He got nothing but a stab in the back in return.

After his "ploy" was revealed, Daniel's YouTube career went downhill quickly, with his videos consistently receiving more dislikes than likes and his comment sections always being flooded with hate. On 19 August 2015, Daniel released a final video announcing that he was quitting YouTube, and although he mentioned school as the primary factor in his decision, it's possible that he finally grew tired of the hate (JJ believes this was the reason). In this final video, Daniel finally issued a years-overdue apology to JJ, and JJ posted a tweet accepting the apology.

In August 19, 2017, he made a video of his return on YouTube, revealing the he has gotten married with his wife and having a daughter, with Gudjon now being a father.[1]

In February 2018, JJ met Gudjon in Iceland with tweeting a picture with the caption "beef squashed", meaning that they settled down from the drama since and forgave each other for the better.[2]

On June 11 2020, he has announced himself with a new video that he uploaded, he then has started to become a full-time streamer on Twitch.[3] 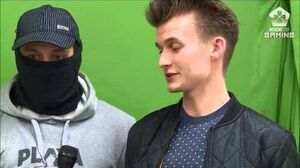 KSI getting dissed by Gudjon Daniel or a nobody... 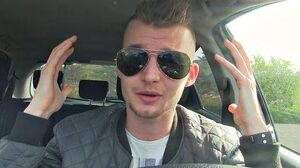 IT IS TIME TO SAY GOODBYE!