The original Sidemen House (2014–16) was a house in which four of the seven Sidemen used to reside. According to Josh, they officially moved in on 16 February 2014 - just under 4 months after the group initially formed.

It was dubbed "The Sidemen House" for obvious reasons.

The house is located in London. For privacy reasons, the exact address of the residence will not be revealed here.

The occupants of the 'Sidemen House' since the beginning were Simon (Miniminter), Vik (Vikkstar123), JJ (KSI) and Josh (Zerkaa). According to Josh, they officially moved in on 16 February 2014.

KSI lived in the house permanently, with the other three, until buying/renting the penthouse apartment in the Stratford Halo in late 2014. At this time, he fluctuated between the two living spaces. In late-2015 - when KSI abandoned the penthouse - he returned to permanently live in the Sidemen House. 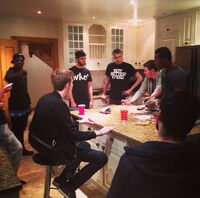 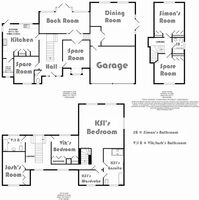 Floorplan
Add a photo to this gallery

In early 2016, the Sidemen were seen filming videos in a clearly distinguishable different house. It was presumed that they were in the process of moving, however (since the four of them still, for a while, filmed videos in the original house) it was also presumed that they bought the new house but just had difficulty selling it.

They fully moved into the new house around May 2016, and remained here until 2019. Vik left in late-2018, with Josh shortly following in early-2019. The second house was the final Sidemen House.

Retrieved from "https://sidemen.fandom.com/wiki/Former_Sidemen_House?oldid=38724"
Community content is available under CC-BY-SA unless otherwise noted.