The 2016 charity football match was a notable sporting event hosted and streamed by the Sidemen. It was the first of their trilogy of charity matches.

On 6 March 2016, the Sidemen announced that they would be participating in - and hosting - a charity football match at St. Mary's Stadium in Southampton (home of Southampton F.C.) on 3 June 2016.

All money generated from ticket sales went towards the 'Saints Foundation' charity. All seven members of the Sidemen played on one team (along with a few others) called Sidemen F.C. and they played against an opposing team named the "YouTube Allstars". The teams were steadily announced on Twitter between March and May.

Ticket sales alone generated over £100,000 for the charity and the 'JustGiving' page added an additional £10,000+ to that figure. Donations can still be made via the link here: https://www.justgiving.com/fundraising/SidemenFC.

The final results of the match were 7-2 to Sidemen F.C. 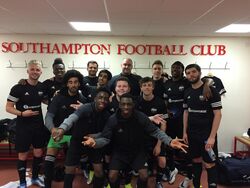